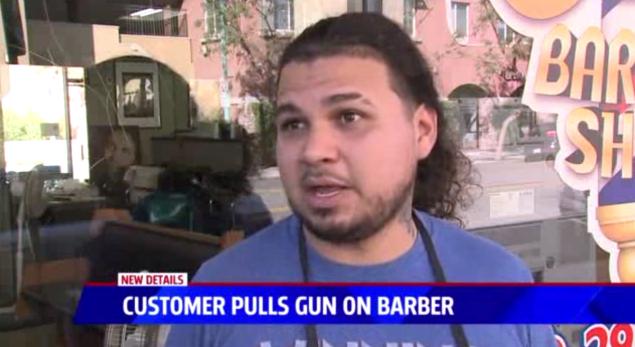 A San Diego woman wasn’t happy with her new haircut and returned to the salon with a loaded gun seeking vengeance.

Adrian Blanche Swain, 29, received a haircut at 619 Barber Shop on Wednesday, left a $20 tip and then returned an hour later pointing a gun point blank at barber Manny Montero and the client sitting in his chair.

Adrian Blanche Swain allegedly attempted to fire a gun at her barber because she was unhappy with her haircut.

The disgruntled customer attempted to fire the gun three times, but it malfunctioned, hetold KNSD-TV.

Fellow barber Chris Tatum said Blanche Swain came into the salon with a different haircut than she left with.

“She came in with a bald spot on the side and I’m like, ‘I didn’t do that,’” Montero said.

After the gun jammed, the barbers restrained Swain until the authorities arrived.

She was arrested and is expected to face a charge of attempted murder, KNSD-TV reported.

“Your whole life runs in front of your eyes, so that’s what it did. That’s what happened,” he said.”For some reason, God was there.

Manny Montero said the customer yelled “look what you did to my hair, motherf—-r” at him.

Tatum said if Swain’s gun went off, she could have shot at least three or four people in the shop.

The staff at the shop said they have already forgiven the disgruntled client for her violent intentions.