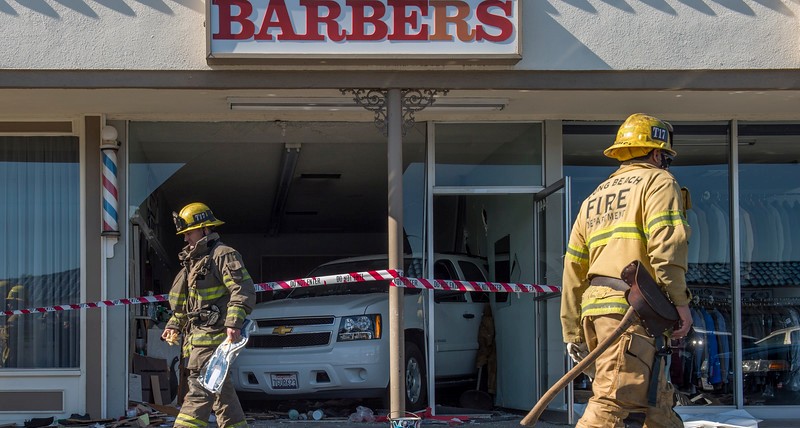 A Long Beach police officer walks within the business where two men where hurt and transported to a local hospital when a SUV went trough the building of Suttons Barbershop and damaged the business next-door in Long Beach, CA. Tuesday February 2, 2016. (Thomas R. Cordova-Daily Breeze/Press-Telegram)

A man suspected of drunk driving is behind bars after backing his SUV into a barber shop and injuring three people Tuesday morning.

• VIDEO: Shop owner next to the barbershop describes the incident

Michael Anthony Digiampaolo, 67, of Lakewood, was booked for DUI and is being held at Long Beach City Jail $100,000 bail.

Police allege Digiampaolo backed a Chevrolet Tahoe into a business, identified as Suttons Barber Shop by Scott McCarty, property manager for the shopping complex there the crash happened.

• PHOTOS: A closer look at the SUV that backed into a barbershop

Officers and firefighters were dispatched around 11 a.m. to an injury traffic accident in the 5400 block of East Del Amo Boulevard, said Marlene Arrona, a police spokeswoman, in an email.

A man who was sitting outside the shop and a second man who was a customer inside the barber shop were injured, Arrona said.

The two men were transported to area trauma centers with moderate injuries, said Capt. Mark Miller, of the Long Beach Fire Department. A third victim was evaluated by paramedics at the scene but he declined to be transported to a hospital.

Digiampaolo was transported to a local hospital for clearance prior to booking, Arrona said.