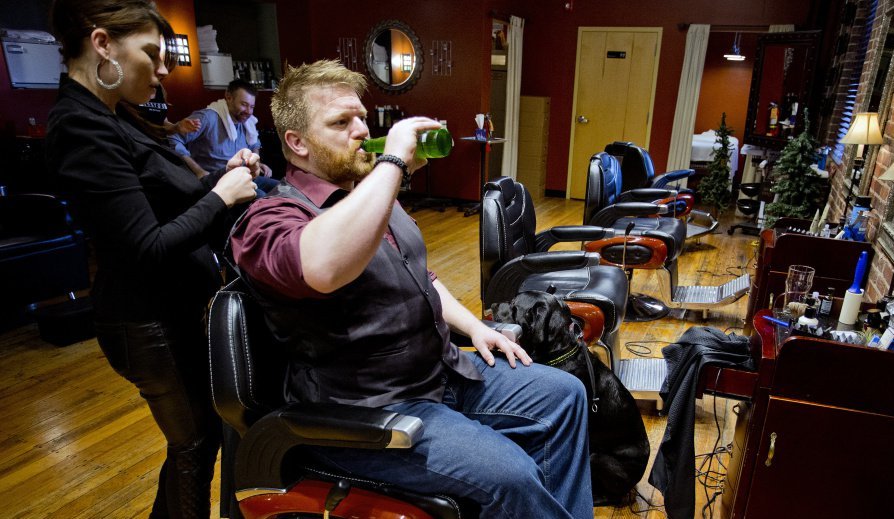 Does your hair salon offer a complimentary alcoholic beverage along with that cut, wash and blow dry? Providing a little something extra to heighten the relaxation during a beauty treatment has become a staple at styling-only salons like Drybar– but it’s not technically legal. It’s not quite illegal either.

AB 1322, which has been nicknamed the  “Drybar Bill” was unanimously approved by the California Assembly last year.

According to the Washington Times, the state’s current laws make it unlawful for any business or entity without a license from the state Department of Alcoholic Beverage Control to sell, manufacture or import alcoholic beverages. But there are two exceptions—limousine services and hot air balloon operators who provide tours can serve alcohol “without a license or permit provided there is no extra charge or fee for the beverages.” AB 1322 would grant that same privilege to thousands of California hair salons.

But it hasn’t been signed into law just yet and now several group are urging Governor Jerry Brown to veto it out of concern for public health and safety.

On Aug. 12, the California Alcohol Policy Alliance (CAPA) held several demonstrations to bring awareness to what they say is an “irresponsible legislation would allow California’s 42,000+ barbershops and beauty parlors to give away alcohol without cost, licenses, permits, monitoring, Responsible Beverage Service training, or enforcement of any current regulations.”

“This bill is nothing more than another ploy to enrich the special interest of a few and the alcohol lobby to the detriment of the health and safety of our community members,” said Richard Zaldivar, co-chair CAPA. “Our community members suffer enough with thousands of alcohol related deaths and other physical harm.”

According to a CAPA press release, the state spends over $22 billion on alcohol-related incidents and 10,000 alcohol-related deaths annually. The non-profit organization Alcohol Justice estimates that the passage of AB 1322 would correlate to an increase of 41 percent more venues being allowed to serve alcohol—which could in turn lead to more deaths and increase the probability of minors being served alcohol at unlicensed facilities.

Salons like Drybar and plenty of nail places around the state (and the country) are known for pampering their customers with a little extra something gratis with treatments. But is the bill unfair to bars and restaurants that have to go through the lengthy, time-consuming process of getting a liquor license in order to sell alcohol to drink?

“Honestly, I think it’s a one-up for a business person. And I’m a businessman,” says Jordan Andino, the owner and chef behind one of New York City’s hottest new restaurants 2nd City. Andino says he enjoys a glass of whiskey at his barbershop– and it makes the experience more fun. “I like that people use that as a marketing tool to get them in their seats.”

Plus, notes the chef, they’re not serving food so it’s not the same business model.

“This is yet another example of two competing value systems,” Arney told Eater.“One is business oriented and cares only about increasing their profits, while the other side is public health oriented and would rather see the citizens protected from health hazards via government policies and regulations.”

Now it’s up to Governor Brown to decide whether the bill poses a legitimate health risk– or we can all keep enjoying a glass of champagne– or whiskey– while we get beautified.