By BTfounderDecember 26, 2015Barber industry
No Comments 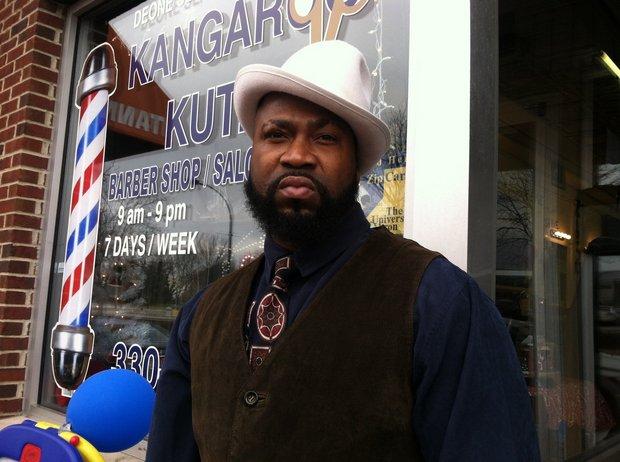 Deone Slater, master barber and owner of Kangaroo Kutz on East Exchange Street in Akron, said he refused to let the Akron rifleman walk in front of his barber shop Thursday morning. (Bob Sandrick, cleveland.com)
AKRON, Ohio — The owner of an East Exchange Street barbershop unleashed a tirade Thursday against a man who has been carrying a gun around busy Akron streets, leading the rifleman to call police.

Akron has been abuzz with spottings of Daniel Kovacevic, 25, walking with a rifle on his back Monday near the University of Akron. Akron is abuzz over a man carrying a rifle on his back through busy sections of the city Monday.

Deone Slater, owner of Kangaroo Kutz on East Exchange Street, did not to want to let Kovacevic in front of his shop Thursday morning. Kovacevic called police.

“He was a threat to my community,” Slater said. “If I can prevent him from shooting up the city, I would. I won’t condone it. Somebody’s got to stand up.”

Slater said police arrived within seconds and tried to calm Slater, who was yelling profanities at Kovacevic.

“He (Slater) was obviously emotional and concerned about his safety and the safety of everyone in the community,” said Sgt. Doug Sandor, one of the officers arriving at the scene.

Kovacevic — who like anyone in Ohio is allowed to carry weapons openly without a license — went on his way. Police had received no further calls about him as of early Thursday afternoon.

“I told him to take his guns off,” Slater said. “I told him let me have five or 10 minutes with him without his weapons.”

Slater said he didn’t understand why police were trying to calm him down instead of talking to Kovacevic.

Slater, who is black, said race played into the police’s response. Kovacevic is white.

“They (police) were more concerned about me than him, as if I were the threat,” Slater said. “It it were me with a gun, they would have shut the whole block down.”

“We don’t look at the color of people’s skin when we enforce the law,” Edwards said.

However, Edwards noted that Kovacevic — since reports started coming in Monday about him carrying a rifle in Akron — has been spotted in predominately black communities.

People Wednesday told cleveland.com they believe the outcome would have been different if Kovacevic were black and compared him to Tamir Rice, the 12-year-old Cleveland boy shot to death by police last year, after he was seen waiving an airsoft gun.

“It’s different if it’s a black person. People say it isn’t, but it is,” 26-year-old Traneece Johnson said. “[Kovacevic] was approached, and they gave him a chance to speak and say he was expressing his right. The little boy didn’t get that chance.”

Ohio law, while requiring a license for carrying concealed weapons, allows citizens to carry firearms openly without a license.

James Weber, chief of the University of Akron Police Department, said those rights come with restrictions.

“If the person carrying a weapon points it at objects or people, or waves it around, the person may be apprehended and face charges of inducing panic, disorderly conduct, menacing or other charges,” Weber said.

Weber said citizens openly carrying weapons must stay outside school zones. They cannot take weapons into buildings, including those at the University of Akron, which ban them. Also, under Ohio law, a person must be 18 to carry a long gun and 21 to carry a handgun.

Edwards said police don’t necessarily like the open-carry law, but must enforce it. Officers receive training in responding to open-carry situations.

If officers approach someone openly carrying a gun, they will ask who they are, what they are doing and why they are there. But gun carriers are not required to respond.

“You have to be careful because you get into search and seizure issues,” Edwards said. “You can’t detain them.

“Ohio isn’t the only state to allow open carry,” Edwards said. “If you don’t like it, you can talk to your legislators.”

Kim Rodecker, owner and chief instructor of Concealed Carry Courses in Cleveland, teaches courses in how open carriers should respond to police.

“If a cop sees you and wants to talk to you, don’t make any stupid moves,” Rodecker said. “Don’t touch or go for your gun. If he asks why you’re carrying, just say you are exercising your rights under Ohio law.”

That’s exactly what Kovacevic told Akron police when they stopped him, according to police.

Edwards said police received seven calls about Kovacevic from worried citizens on Monday morning. One call came from the University of Akron police. He was seen on East Exchange, Sumner Street and in front of John R. Buchtel Community Learning Center on Copley Road.

Edwards said Kovacevic knows the law and what he can and cannot do.

It’s not the first time open carry has been controversial. In May 2014, two men openly carrying weapons walked through Medina Public Square. About 10 people called police, who asked the men to identify themselves.

The two men, James Purdy of Brunswick and Micah Butcher of Grafton, said Ohio law didn’t required them to reveal their identities, but they did anyway, so the incident wouldn’t escalate.

In 2013, Oberlin City Council reluctantly rescinded its law prohibiting guns in city parks, since it conflicted with a state statute. This was after the gun advocacy group Ohioans for Concealed Carry threatened a lawsuit and demonstrated with guns in public parks.