Barbers, stylists disagree on who can display a barber pole

By BTfounderDecember 2, 2015Barber industry
No Comments 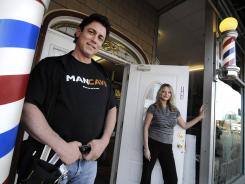 ST. PAUL, Minn. – Friendly arguments aren’t hard to find in a barbershop, but try cutting in on a hallowed symbol — that red, white and blue barber pole — and it may be time to hide the scissors.

Steeped in history and symbolism, the iconic cylinders spinning on storefronts across America are an increasing source of friction between barbers and beauticians.

Minnesota, Michigan and North Carolina are the latest fronts in a spreading legislative campaign to reserve the poles for barbers. The proposals, which often include fines for offenders, are driving a new wedge in a trade where gender lines have long run deep.

“The barber pole is the oldest sign in town besides the cross. It should not be displayed where there is not a licensed barber,” says Charles Kirkpatrick of Arkansas, a barber since 1959 who keeps tabs on such legislation for the National Association of Barber Boards of America.

For many, the only real difference between a barber and hairstylist is the clientele they serve. But barbers say the tools of their trade and unique services they provide make them different, and laws are needed to prevent beauty parlors, salons and other establishments from passing themselves off as barbershops, including chain shops that use the barber name and logo but don’t have a licensed barber on site.

Cosmetologists argue that haircuts are haircuts, and say the protective efforts are silly and chauvinist.

“They’re still trying to hang onto the vestiges that say they’re special. I can cut a man’s hair. Why shouldn’t I be able to put a barber pole up?” says Jeanie Thompson, owner of a